Larry Caputo is an American TV personality who was brought to the limelight by his appearance on the reality show, Long Island Medium. His wife Theresa Caputo starred in the series that premiered in 2011 and ran to 2017. A man with love for fashion, motorcycles, and tattoos rose to fame by co-starring with his ex-wife in the show.

As time moves, Larry Caputo has opened up about his dating life. He has recently confirmed that he is back to dating. He recently stated that:

“I’m fortunate enough to say I have met someone special but I’ll just leave it at that for now.”

According to TMZ, Larry Caputo’s new girlfriend is none other than Connie Talley Stauddy. It was confirmed after he was spotted out together with here shopping in Alabama.

So who is Larry Caputo’s New girlfriend Connie? Larry’s 53 years old girlfriend is a resident of Decatur, Alabama.

There is an interesting story about how the couple met. When Connie reached out to Larry’s wife, Theresa for reading, Larry and Connie came to know each other.
After that, they were in constant touch despite long distance and finally, they started dating after a couple of months of long-distance talking.

So, what makes Connie a perfect match? well, She is more like Larry. She is also divorced from her ex-husband Robert Scott Stauddy.

Life is not about waiting for the storm to pass. It’s about learning to dance in the rain!”

Larry Caputo was married to a popular TV reality personality, Theresa Caputo. She was the co-starring castor in the Long Island Medium show. During one of the episodes of Long Island Medium, in March 2015, Larry reminisced about Theresa by saying:

“When I first met Theresa, I thought she was great, she was beautiful, she was fun. But, never in my wildest dreams did I think that I would be marrying that girl”. She was such a star who garnered a very large fan base. She would act like a superhuman with powers to communicate with the dead. There was a lot of controversy to these powers, and that created a large following on the show.

Larry and Theresa got married in 1989. They had two children from their happy marriage. On October 1990, they welcomed Larry Caputo Jr as their first born child. He is now a grown up with a bachelor’s degree in communication and media studies from the College of Mount Saint Vincent. He graduated in 2012. Their second born daughter, Victoria Caputo was later born in 1994. Larry Caputo with his wife Theresa Caputo and with their kids

After close to three decades of married life, Larry Caputo and Theresa decided to call it quits. They divorced in 2017. Preceding the divorce was a separation that sounded painful for both of them. Larry had released a statement to TMZ saying:

“The separation was a three-month trial period and we’ve moved on from that point. We’re in divorce proceedings so that’s been going on for the past six months. It’s not finalized. I don’t know when it will be but that’s where we’re at. I’m doing fine. I know she’s doing well. I’m happy. We’ve moved on with our lives.”

He went ahead to confess that their busy schedules are what made their marriage land on a rough patch. He says:

We’re having a difficult time. I think a lot of the frustration has to do with us not spending the time together anymore. Along with that comes the lack of communication so it’s like losing your best friend. It’s hard.”

Larry was said to have even moved to Los Angeles and been living at the west coast, while his wife lived in New York.

Theresa also had something to say about their marriage at that point of separation:

“Things at home have been really stressful lately and Larry and I have hit a bump in our relationship. And unfortunately, the truth is we’re considering spending some time apart. So, I’ve been trying to get my mind off of things by being more adventurous.”

At the time of divorcing, Theresa expressed herself by saying:

“Since the last season of Long Island Medium and through a period of time, Larry and I’s relationship has changed. We’ve been there for each other, you know, through thick and thin, you know, good times, and right now are not such great times.’’

They agreed to leave apart but continued to support their children. The couple gave a statement in that regard by saying:

”After 28 years of marriage, we have decided to legally separate. We will always love each other and our two wonderful children. We are united in supporting each other and our family. Please respect our privacy during this time.”

Theresa thanked her fans for their support through a tweet in December 2017:

“I’m overwhelmed by the love and support for me and my whole family while we’re going through this difficult time. One thing will never change and that is that we will always love and support each other and be the best parents we can be to our children. Love you guys XOXO.”

Who is Larry Caputo? His career info and net worth.

Larry Caputo 62 years is an American of White ethnicity, born on August 1956 in New York. Larry played hockey for many years as a hobby. He also coached a team that his son played in He owned a successful restaurant before he started appearing on Long Island Medium.

After working for many years in his restaurant business, Larry Caputo sold it off and retired from the business at the age of 55. He joined his ex-wife Theresa in the reality show, together with other cast members, Frank Marino, Chris Jacobs, Melanie David, John Mateer, Jim Parsons, and Kenneth.

Larry Caputo is estimated to have a net worth of $3 million. The sale of his restaurant business acquired a large amount of the net worth. He also earned a good amount of earnings from his appearance in the show. 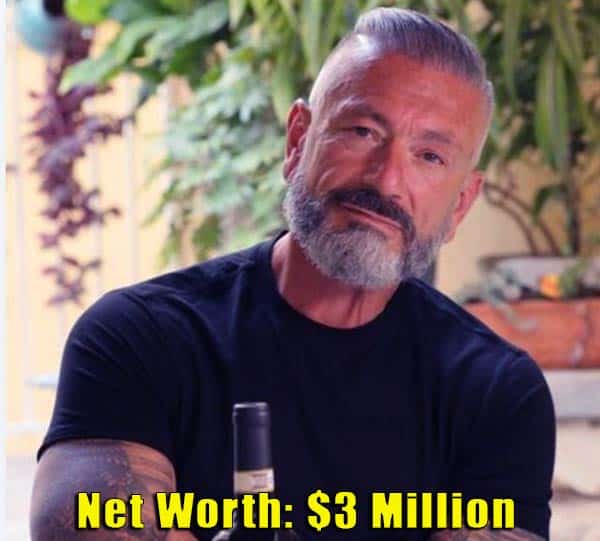 It is not well known how much he would earn per episode from the show, but by looking at the length of time casted, he must have earned a good deal.

After the show, he went ahead to start a new clothing business, Big Larry Apparel. He is said to earn a lot from this business. Is Larry Caputo Gay? Or just a rumor? Larry Caputo is not a gay

Larry is not gay as the rumor mills may have purported. He has recently revealed that he is back to dating. However, he is not gay.

This is a name familiar to any dancing with the stars fan worth their salt. You cannot mention dance, without mentioning this man, Bruno Tonioli, particularly if you are British. The former dancer turned choreographer is an institution, a pillar… Read More »Bruno Tonioli Wife, Gay, Partner, Age, Net Worth. If you are a fan of cooking shows, then Nick Stellino is probably one of the first names that pop into your head whenever you think of celebrity chefs. The man is exciting, controversial, flashy, and eccentric; there is never… Read More »Nick Stellino, Net Worth. Meet his wife Nanci Stellino. Scott McGillivray is a Canadian TV host on both the DIY Network and HGTV on the show, Income Property. The program is by far one of the best home renovating series; not only for its entertainment value but also under… Read More »Scott McGillivray is married to wife Sabrina McGillivray. Know his net worth, age, family, Wiki-Bio.