Troy Landry is an alligator hunter, television personality, and the self-proclaimed ‘King of the Swamp.’

Landry usually works with his family, including his two sons, Chase and Jacob.

All three appear in the famous History Channel’s Swamp People. Troy and his team set out in his three-boat armada with one goal. This is to trap as many gators as possible to keep their population in check.

Troy’s best run on the show came during the 12th season as he and his team recorded an impressive 1000 tags. Here is a look at Troy Landry’s latest interview.

How did Swamp People change Landry and his family’s Livelihood?

Troy talked about how lucky he and his family were to be part of the show during his interview. He revealed that about 5,000 other gator trappers were operating along the swamp. Because of the show’s success, Troy has become a local celebrity in and around their hometown.

Troy talked about how they can’t go into town without being recognized.

Fans even regularly stop them for their pictures and autographs. Troy Landry and his family are treated like movie stars in this respect.

Judging from his interview, Troy doesn’t seem too bothered about his fame. Troy Landry with his family

Members of his family are equally excited about their newfound celebrity status. One such example is his mother’s experience.

When Mrs. Landry went to a scheduled doctor’s appointment in Baton Rouge, she became the talk of the town.

Once the people at the hospital discovered that she was Troy’s mom, they begged her for autographs and pictures. This was an experience Troy said his mother enjoyed.

How has the show Affected their livelihood?

The popularity of Swamp People has had a positive effect on the gator business. Troy talked about how the sale of alligator meat has vastly improved since the show started.

In fact, according to Troy, the demand for the aforementioned meat doubled as curious fans wanted a taste of what the swamp had to offer. Interestingly, Troy noted that hide sales hadn’t been affected at all. However, he added that this could change soon, especially as the show continues to garner popularity.

How does he prepare gator meat?

Troy’s preferred method of cooking gator meat is grilling. He talked about how he likes to pan fry the heart, then throw in a sumptuous sauce piquant. This helps create a much better stew.

When pressed for more details, Troy revealed that they typically use red meat for cooking the accompanying stew.

They’ll either use a grill, fire pit, or frying pan for the white meat. He favors the latter.

One central reservation Troy had about the show was that it would show the killing of gators. These are monstrous creatures that do not go down without a fight.

In his own words, Troy was worried that the show would focus on the bloody aspects of trapping.

However, the history channel did not dwell on the killing part too much to their credit.

They primarily focus on the families and their lives in the Bayou. While the show touched on harvesting gators, it focused on the people.

His signature outfit on the show.

Most fans on the show have noticed that Troy Landry has a signature look. These are the striped polo t-shirts he wears on the show.

Troy’s wife purchased these shirts for him from Kohl in bulk. Regarding their brand, his shirts are from Ralph Lauren. 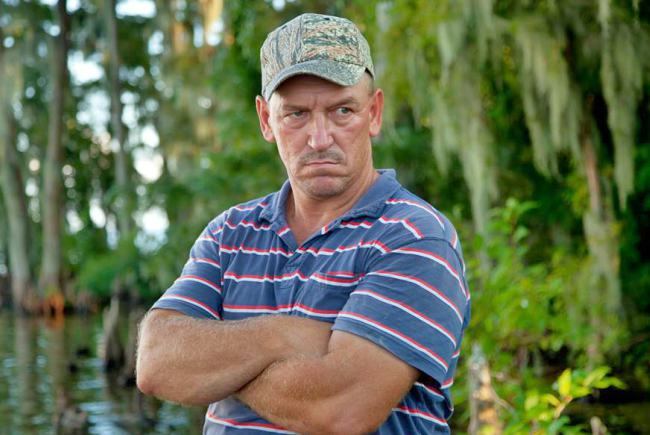 In the interview, Troy revealed that he owned about nine different pairs. After years of wear and tear, only three teams are left.

Landry talked about how these shirts have brought him nothing but good lucks.

In fact, he was wearing one every time he caught a giant gator. This is why he and his wife are actively looking for more pairs.

How do they cope with the film crew’s presence?

Troy talked about the camera’s crew presence in the swamp. He revealed that he had reservations about having more people on set because it increased the risk of injury.

However, they have learned to be much more careful to ensure everyone’s safety.

Moreover, the team has resorted to taking things slow, protecting all their interests.

After years of working together, Troy considers the film crew part of his family.

Landry joked that they even tell his wife and mother when he does something wrong. Troy and his family do their best to make the crew feel at home. They even make it a habit to feed the camera operators four to five days a week. Troy Landry with his film crew

What does he do in the off-season?

During the interview, Troy touched on how he was presently fishing for crawfish.

To be more specific, this is a lucrative venture he usually explores during the off-season, around late November.

They mainly operate around the Lafayette area and sometimes explore the Atchafalaya Basin.

Troy spends time at his father’s bait shop when he is not fishing. Landry’s average day includes drinking caffeine in the morning and switching to beer by the afternoon. Troy also interacts with multiple crabbers and fishers who operate in the area.